Time for a Weissbier

Time to make some beer.  I've been brewing beer for about a year now, starting off brewing using Malt Extract and some hops, but quickly progressing up to All Grain.  I've so far brewed about 20 different beers from All Grain, but never a Wheat Beer.  Part of the reason was I didn't really have the right equipment, part was there were just so many other things to brew.

So, time to get a wheat beer underway.  My recipe is below, and for those who are a bit pedantic, yes it's true I can't really call it a Weisse beer as it has less than 50% Wheat in it.  I know this now, I didn't when I came up with the recipe and did the brew. 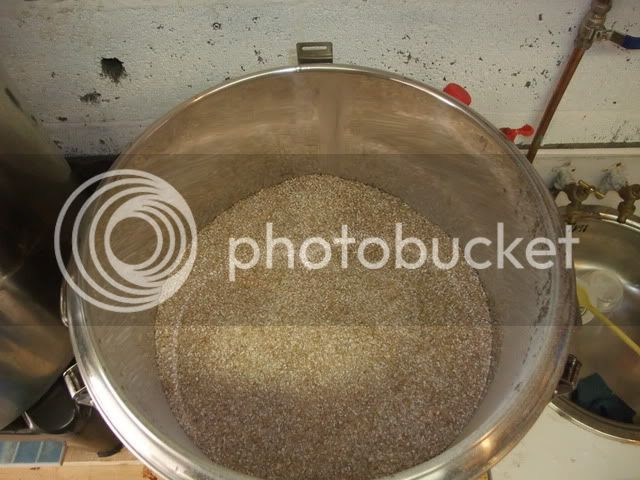 All the Grains patiently waiting in the Mash Tun getting ready to be turned into some lovely juicy beer.  The water, or liquor as brewers call it for some reason, was added at a strike temperature of 72C to get a Mash at 67C.  This was left there for 90 minutes to extract all the lovely sugars from the grain. 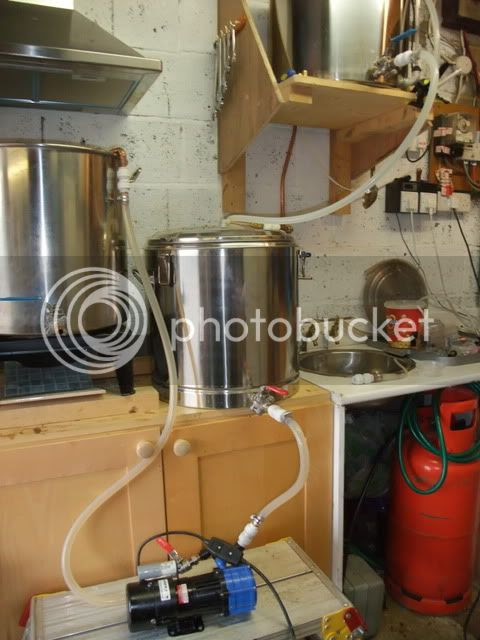 Time to get it all working, The sparging process underway,liquor running into the Mash Tun rinsing all the sugars from the grains and the wort is getting pumped into the boiler ready for the boil.

All the hops are going in for the entire boil of 60 minutes for this brew. Unlike a hoppy beer where you would add lots at different intervals, usually later on in the boil and after it has finished to get all the hoppy flavour and aroma, you don't need that in a Wheat beer so they all go in early. 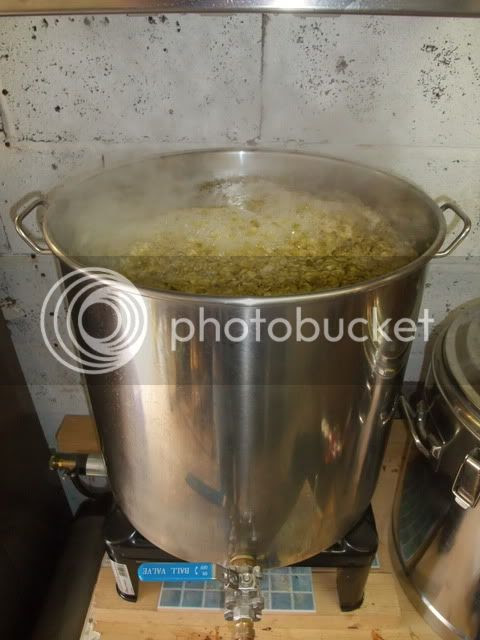 The whole lot boiling away in the boiler.  Always nice to have 60 Litres of wort jumping around in front of you at eye level, I'm sure Mr Health and Safety would not be too pleased.

Looks to be about 1.052 which should be just right.

It then goes into the fermenters with some yeast for about a week at 20 centigrade to turn the sugar into alcohol and make beer. 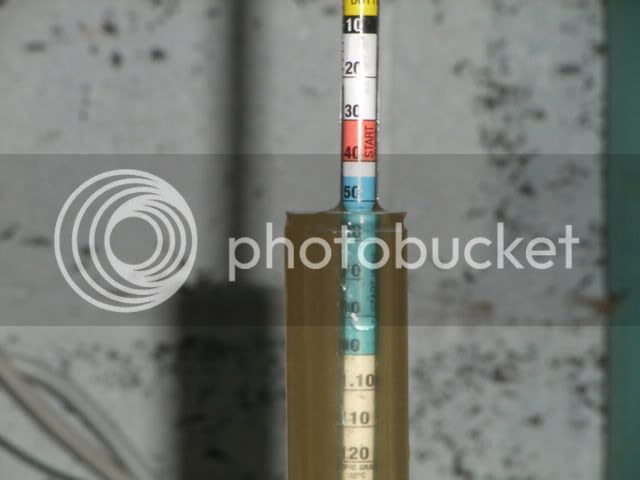 A week later and it's turned into something resembling wheat beer, I have transferred it into kegs and force carbonated.

In a few days time I shall be able to sample it and see if we have success.
Posted by Growling Dog Beer at 12:21 1 comment:

Brewing my own beer - A Brief History

I returned to Home Brewing in August last year, my previous attempts before had been a few kits which never turned out too well.  I started with the sole intention of making some cheap drinkable beer, the price of bottles of decent beer was becoming a bit restrictive, and I do like my beer.

I started off with a trip to my local Home Brew shop to pick up the essentials, some Malt extract, Brewers Gold Hops and some dried yeast, a plastic bucket and barrel.  This turned out to be a reasonable beer, but already I wanted more.  A plastic boiler later and another barrel and some more ingredients I managed a full 5 gallon boil using extract and more hops.  I progressed to steeping some grains, the beer kept improving so I wanted more.

The transition to All Grain was swift, I bought a second hand Cool Box style Mash Tun from a bloke on the forum, another plastic bucket to act as an HLT and there was no looking back.  What more could I want, well quite a lot as it turned out.

The plastic kegs were frustrating me, the lids wouldn't always seal, or I'd overprime and one would split, I needed a more reliable option, along came the cornelius keg,  I had been warned they would breed but I bought my first keg 3 months ago, I now have 11 of them.

I did have a dilemma though, a corny keg only holds 19 Litres which isn't really enough to warrant spending 6 hours in the garage brewing, the solution, a bigger brewery so I could fill 2 at a time.

A bigger brewery it was then, and of course all stainless steel and shiny, along with some temperature controlled fridges, all from freecycle, to act as fermenters, cold stores and a kegerator.

The brewery is finished for now, I have made 21 different beers from grain and am loving it, the most recent being my first attempt at a Weisse, more about that in another post.

Below is a quick shot of my kegerator controlled at 12 degrees centigrade and my shiny brewery. 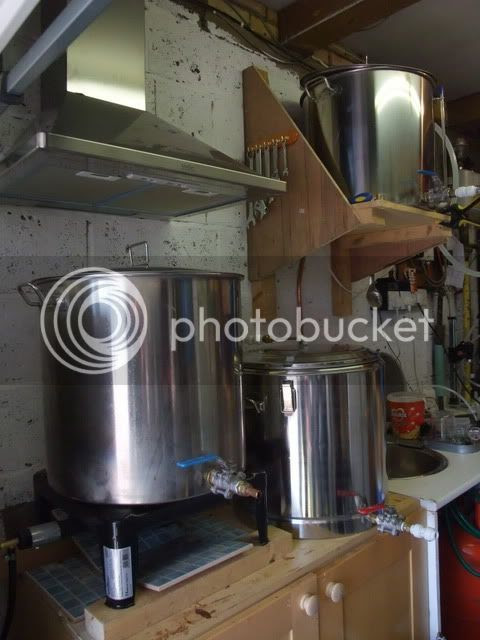 The kegerator can hold 4 corny kegs, so I can have 4 different beers on tap,  I really do need to find something better than Post it notes for beer labels though.  I offer no apologies for the fact all my beer is kegged, it is the only way I can maintain 4 different beers in peak condition.  I can't be bothered with bottling, it's just too time consuming.  There is also space in there for some bottles as well though,  The latest MyBreweryTap 52 week beer club case is in there along with 12 bottles of beer from Magic Rock Brewery and a few from Thornbridge and some other US beers.  Plenty of beer for me.


The brewery is mainly home made, it comprises 2 x 70 Litre Stock Pots, one as an HLT heated by a 3 kW Immersion element, the other as a copper heated by Gas.

The journey is well underway

I've been drinking beer for a number of years, well ever since I could hold a glass really.  Some of it bad, some of it good, some of it amazing.  I never really understood it and appreciated it though.

I've always preferred 'Real' Ale, than that fizzy watery stuff they try and pass off in pubs as lager, and recently my exploration has grown.

I have in the past bought nearly all the different beers they sell in the supermarkets, and been to beer festivals, but only recently have I started actually brewing the stuff.  I now have a whole new level of appreciation for beer, I understand about what hops and grains do to beer, I enjoy drinking beer more now trying to work out whats been used to give the distictive flavours.  Guessing the hops is always a challenge.

Through myBreweryTap.com and the 52wbc I have discovered many varied beers that I would have otherwise not encountered, and through The Home Brew Forum and Jims Beer Kit, I have learnt how to produce excellent beer at home.

I will be using this blog to post some reviews of some commercial beers I have tried and I'll be blogging about my adventures in Home Brew.
My beer journey is progressing, and I'm enjoying it.
Posted by Growling Dog Beer at 06:02 No comments: